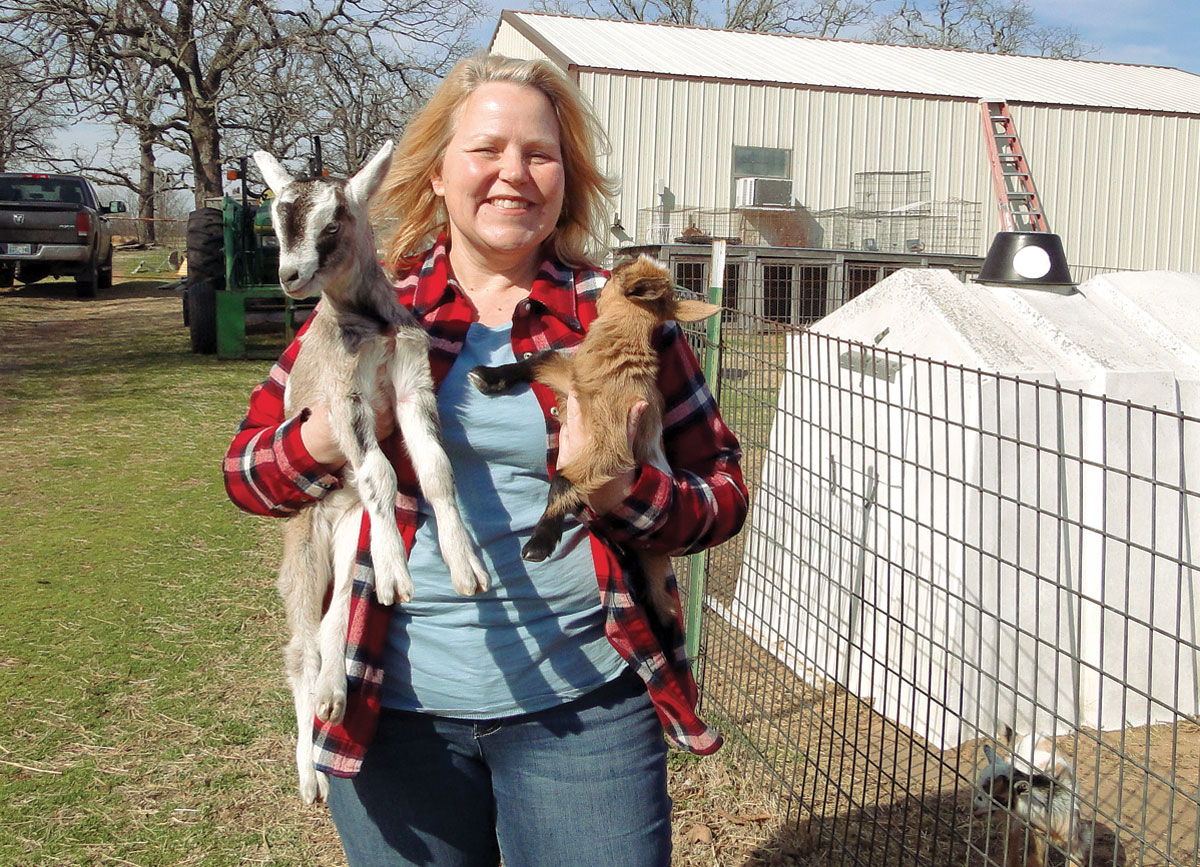 Ellen Dorsey started with Pygmy-type goats, but now owns some of the best dairy goats in the country

Ellen Dorsey of Chelsea, Okla., and goats just seem to go together.

Both are lively, funny and independent. Ellen first saw “cute” Pygmy-type goats 20 years ago on the side of the highway and knew right then she needed some.

After purchasing about a dozen, she met Hughlene Dunn, who talked her into purchasing some older bloodline Nigerian Dwarf goats, a dairy goat, rather than the meat Pygmy-type goats she owned.

She soon decided she needed Nigerian Dwarf goats that were very different from the two she purchased. Her original ones were more closely related to the dwarf goats that were imported from Western Africa years before. The more modern type had been developed into a more correct dairy-style goat, with more angularity and openness with strong, yet refined, clean bone structure. Strong yet not lacking in femininity, with the ability to produce milk.

Ellen and her husband Chris met, married and combined families with a total of six boys, aged 10 to 35 and five grandchildren.

Two of the boys live at home and help with all of the chores on the 10-acre farm. Ellen leases an additional 80-plus acres for hay and runs some beef cattle with her son, Joshua.

The goat herd, which carries the herd name Dill’s, consists of 80 does from three breeds. The Nigerian Dwarf being her major breed, with the addition of seven French Alpine does and four Toggenburg does. She runs approximately 10 bucks at any given time, again mainly Nigerian Dwarves with two French Alpines and one Toggenburg buck.

Ellen admits to being highly competitive and is pleased to own a majority herd of senior Nigerian does with appraisal scores ranging from 89 to 92 in the linear appraisal program sponsored by the American Dairy Goat Association. The highest scoring dairy goat is an Alpine doe owned by Tempo in Oregon with an impressive appraisal score of 95. There have only been two Nigerian Dwarves in the country scoring appraisals of 93. Naturally beating that high score is one of Ellen’s breeding goals.

Competition is based on general appearance, dairy strength, body condition and mammary structure. Ellen is proud to have bred two reserve national champion does, but is also aiming for that coveted national champion title.

Just as with cattle, keeping breeding records is critical. She describes her program as being more like a spider web than a family tree because she relies heavily on line breeding and has been breeding that way for 19 of her 20 years with excellent results.

She utilizes artificial insemination in her breeding program and has researched embryo transfer, which is also available for breed improvement in the dairy goat industry.

Unlike many in the registered goat business, she makes money, with most of it coming from the sale of goat kids. Milk production is a byproduct of her business and side income stream.

Ellen has developed a formula for growing healthy White Tail deer fawns with a ratio of Nigerian Dwarf milk combined with her Alpine and Toggenburg milk. She also bottle feeds calves on goats milk and sells milk to people, but cautions those using goats milk as a replacement for human milk for infants to check with their doctors because goats milk does not have all the same vitamins and nutrients needed for healthy infants. Finally, Ellen sells semen across the country and has had two of her herd bucks accepted into the Australian semen and embryo export program after passing rigorous testing.

Ellen is also very active in the dairy goat registry, serving as the  president of the national breed club for Nigerian Dwarves. She attends up to seven shows a year, including the week-long ADGA National Show when it’s not too far away. She also attends the annual meeting and convention for a few days as she sits on the board of directors. While she’s away, husband Chris takes care of all of the “kids.”

Goats require very close monitoring  because anything, even a rainstorm, can throw them off. Adjustments are continuous. Generally, milkers pasture and receive a 16 percent protein and 6.5 percent fat ration mixed with alfalfa pellets, top dressed with loose minerals specially formulated for milk production.

Bucks and dry stock are given a 14 percent protein and 2.5 percent fat calf ration mixed with a goat ration to prevent urinary and dietary issues. The goats also receive hay, but are extremely sensitive to mold and can die from moldy hay. Consequently,goats receive only the square bales which the Dorseys harvest, not only to control cost but to control quality as well.

Admittedly, keeping up with environmental issues and adjusting nutrition program is her biggest challenge with weather not that far behind. Because she keeps all of her animals in show condition, except does immediately after they kid, parasites are not typically a problem. New mothers, however, have a few parasite and metabolic issues which she prevents through a good feed and mineral ration.

“The best advice I was ever given was understanding that having livestock meant getting used to having dead stock,” Ellen said. “I was told crying doesn’t help and I needed to get back to work to help the live ones. Now our children also understand that, and are more prepared for life.” 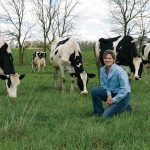 Rooted in the Dairy Industry