Still Playing in the Park 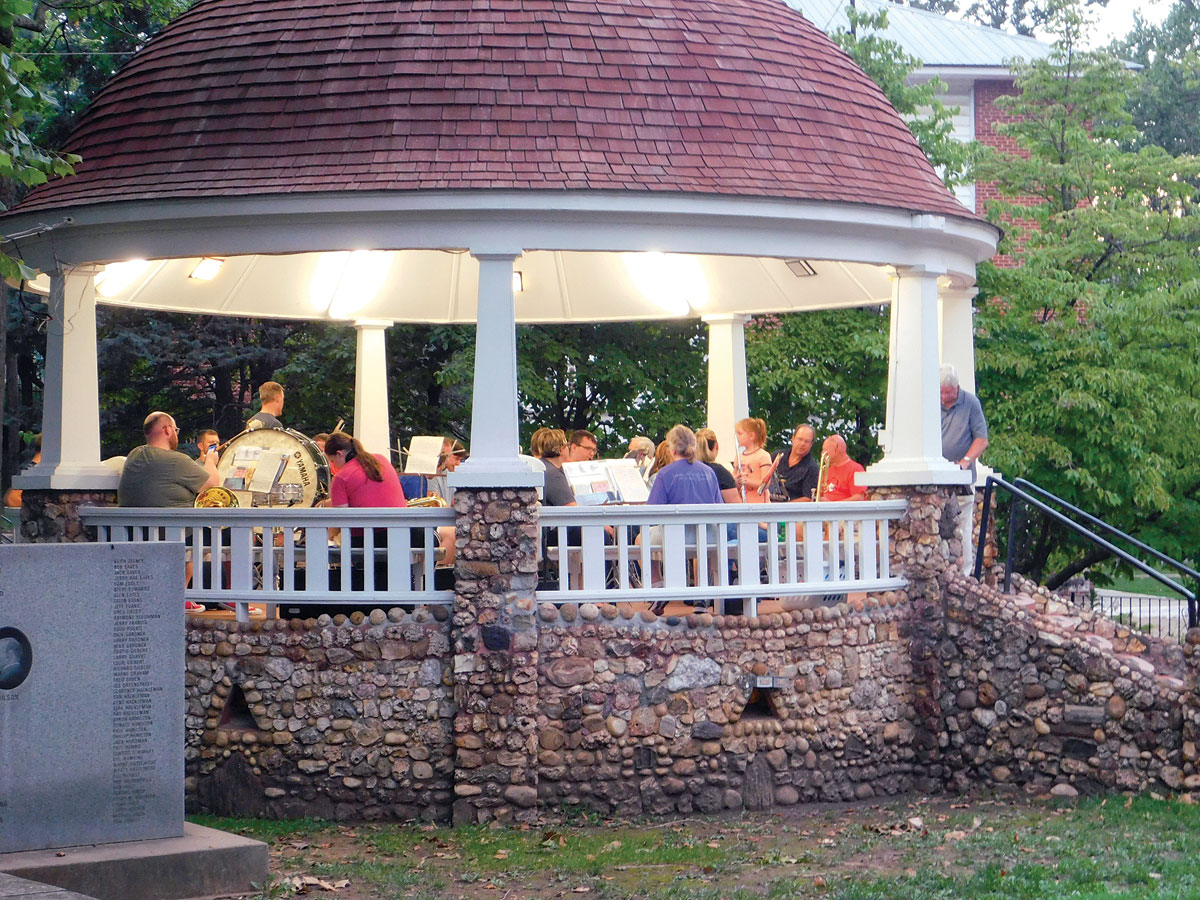 El Dorado Springs, Mo., came to be because Joshua Hightower was taking his wife Carmelia to Eureka Springs, Ark., due to her ailing health.

They were led to the spring by John A. Jackson, Sr. The Hightowers ended up staying two weeks because of the significant improvement in Mrs. Hightower’s health.

News of the medicinal value of the spring grew rapidly and served as a magnet to draw people to the community. The spring, and park that grew around it, is still the focal point of the community. The city of El Dorado Springs was officially incorporated July 20, 1881.

The Founders Day Picnic began in 1885 and has continued each year. The premiere event of the year brings in thousands of people with many class reunions scheduled at this time.

The municipal band was formed in 1885 or 1896. The first band director was C.V. Mickey, who named it the Wonder City Rube Band. This is the oldest, continuously playing band in Missouri and plays each summer in the beautiful park in downtown El Dorado Springs.

The band played a prominent role in early El Dorado Springs. It provided entertainment to those gathering in the park, but played at many special events, such as the first train arrival in El Dorado Springs in 1898 and escorted the first automobile through town in 1908. The band also played out of town acting as a goodwill ambassador for the community.

The first bandstand was built in 1887 with funding from a voter approved issue for $3,000 for park improvements. It was a two-story, open-air structure with elaborate lattice work. The band played from the second floor.

In 1899, Professor A. M. Henry became the band director. He extended the band season to a five-month schedule from four months. The band became known as “Henry’s Park Band.” In 1901, a new bandstand was built. This bandstand was a single-story structure in the shape of an octagon. The band also got new uniforms for its 10 members.

Despite sending several members to World War I, the band continued to play on. Women picked up the slack and first played in the band in 1919. In 1925, band director D. I. Netherow formed an all-women’s band called the American Maiden’s Band.

The band had been supported solely through private donations. Supporters of the band believed that a modest property tax would be the best way to support the band since the entire community benefited.

A bill was introduced in legislature in 1928 by State Senator Snodgrass to authorize a property tax for the support of a municipal band. The legislation passed and in 1929, El Dorado Springs voters approved the local band tax.

In 1937, the third and current bandstand was completed. This structure is round in shape. Its base is built with sandstone rock. Julian Richards designed it and H. W. Schwalm did the masonry work. To make it a community project, people were invited to bring rocks to be used in the construction of the base.

The municipal band played through World War II. It also survived a petition to abolish the band tax in 1960.

In 1966, Judge W.W. Sunderwirth took over as band director, a position he served until 1979. He was the longest serving band director. His wife, Lillian, managed the band until her death in June 2010 at the age of 99. Miss Lillian, as she was affectionately referred to, organized the music for each band concert.

Terri Biddlecome became the manager after Miss Lillian’s death and is still holding the position. She brings her love of music to the community and is continuing the tradition of family by having a grandchild, Lauren Hold, sing with the band.

Gary Hardison became the director in 1980 and is still serving in that capacity. The band plays concerts during the months of June, July and August. Each Friday and Saturday evening at 8 p.m. and Sunday afternoons at 2 p.m.

An evening spent in the beautiful park listening to the band is a delightful way to visit friends and enjoy a part of Cedar County history.