Using Ammonia to your Advantage

With the extremely wet summer in the Ozarks, coupled with some residual effects of the 2018 drought, many producers had no choice but to cut and bale lower-quality hay than normal.

This has raised some concerns about meeting the nutritional needs of livestock. If producers have a batch of low-quality hay, the nutritional content can be drastically improved by treating it with ammonia.

Ammoniation should only be applied to low-quality hay, as higher-quality grass hay can become toxic with nitrates after ammonia treatment and cause “crazy cow” syndrome, University of Missouri Extension Agronomist Field Specialist Rusty Lee explained. MU Extension research has shown there is no cause for concern if tall fescue hay is endophyte infected prior to the ammonia treatment – the ammonia will break down the toxins, and the ammoniated fescue will be five times less toxic than pasture.

To use the ammoniation process, MU Extension outlined the following steps:

• Stack round bales in a pyramid so the covering will shed rainfall. Stack height is limited by width of plastic used to cover.

• Plastic sheeting should completely cover the stack with sufficient length to cover edges with soil or lime.

• Fill the ammonia tank with only the amount required for the stack being treated. This will avoid the risk of overtreating.

• Add ammonia slowly by cracking the valve on the tank. Let ammonia trickle into the middle of the hay bales overnight.

• Air out bales three days before feeding to allow the ammonia to clear. Air out before testing forage to check improvement.

Experts also recommend, disking the area where the hay is to be stacked to get a better seal when tamping the plastic covering into the soil, feeding the treated hay to animals with the lowest winter nutritional requirements, such as dry cows, and making sure to supplement trace minerals, vitamin A and phosphorus when feeding ammoniated hay.

Producers who feel their hay could benefit from ammonia treatment are encouraged to contact their local extension professionals for guidance with this process.

3. The reaction requires some moisture (at least 10 percent with an optimal moisture of 15 to 18 percent). It is best to bale straw or stover as soon after harvest as possible or early in the morning when there is some dew present.

4. Apply ammonia slowly (no more than 30 pounds per minute) to minimize ballooning and stretching of the plastic. Anhydrous ammonia expands from a liquid to a gas when it is released from the pressure of the tank.

http://www.ozarksfn.com/2019/08/22/using-ammonia-to-your-advantage-2/2019-08-22T08:04:16-05:00Klaire HowertonFarm HelpAmmonia,crazy cow syndrome,Fescue,forages,improve digestibility,low-quality hay,palatability,proteinAmmonia can be added to low-quality hay to improve digestibility and palatability With the extremely wet summer in the Ozarks, coupled with some residual effects of the 2018 drought, many producers had no choice but to cut and bale lower-quality hay than normal. This has raised some concerns about meeting...Klaire HowertonKlaire Howertonklairebruce@gmail.comAuthorOzarks Farm & Neighbor Newspaper 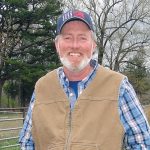 « A Winning Combination
Planning Ahead »