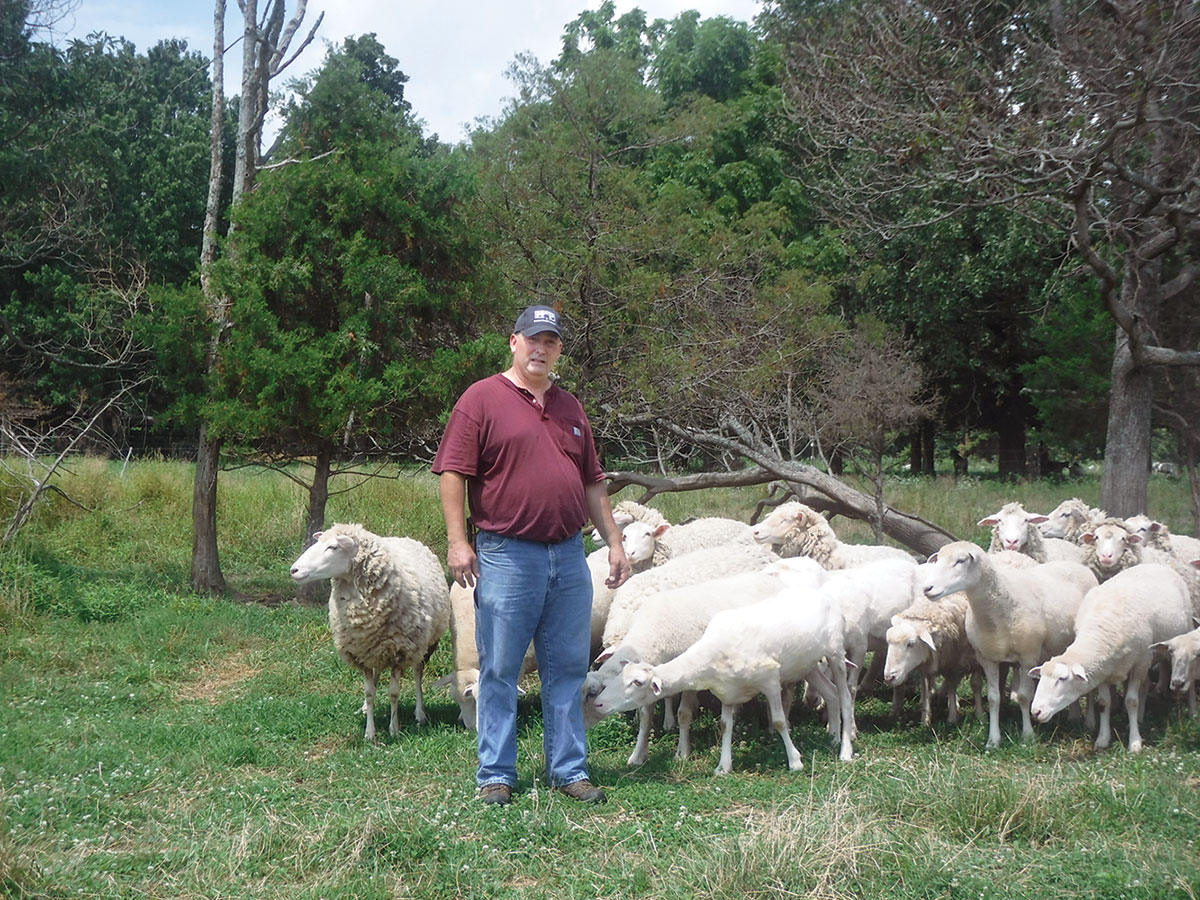 Ray Jones has been interested in sheep since childhood.

“My grandfather, on and off had some. He had a big farm in North Missouri. They just always clicked with me,” Ray recalled.

He enjoyed helping his grandfather, A. R. Hammett, with his farm.

“The main thing with the sheep is, per dollar invested, as a return on your dollars, I feel they outperform cattle all the time.”

Ray began farming his own land in 1993. He raises Polypay sheep, Boar/Kiko cross goats, as well as a small herd of Red Angus/cross cattle on 100 acres outside Rolla, Mo.

Forty acres are in production, the other 60 are wooded.

Ray said sheep are considered to have a lower intelligence level when compared to some animals, but that’s not the case in his experience.

“I have cattle too, in the back,” he said with a laugh. “And my feeling is, there is no farm animal that is really smart. Cause you hear cow guys, cause I’ve worked on different farms, say, ‘Oh, sheep are so dumb, and cows are so smart.’ To me ones as stupid as the next. You just have to know how to handle them and know their different traits.”

Ray divides his time between farming and a full-time position at Fort Leonard Wood, Central Issue Facility where he is employed as a contractor. Prior to his current position, Ray worked at the distribution center for Walmart in St. James.

His work at the fort keeps him busy, but Ray doesn’t let working off the farm slow him down.

“I try to breed at least 50 ewes per year, and go from there,” he explained.

He admires the Polypay breed for their versatility.

“I wanted a sheep that was early-maturing, good mothering and would be a solid cross for a black-face ram,” he said.

Ray breeds the ewes to both a Hampshire and Polypay rams, which are kept in separate pastures.

“They’ll fight,” he said. “If they are raised together and they are really small, they normally do OK, But they are both great big boys, and they will fight.”

When it’s sheering time, Ray either hires outside help to come or does the work himself. Ray has found the Amish to be reliable and do a good job. The wool is shipped to Ohio, and most shearing is done in April.

Ray grows some of his own hay, a fescue and clover mix. The rest is purchased off the farm. When it’s time to harvest, he relies on family and friends to help with the work.

The ewes are kept on pasture, with a custom three-way mix ration of corn, soy hulls and corn gluten that he feeds during lactation. Lambs are offered a commercial lamb pellet shortly after birth. The lambs gain about three-fourths to a pound a day before they are sold at about 70 days old.

The animals receive all necessary vaccines.

Ray sells his lambs at various sale barns throughout the area, and some directly off the farm. Where he sells can depend on how fast the lambs are growing, and his work schedule.

Ray currently has 20 nanny goats, and one Boer buck.

“They get into stuff,” he said, smiling.

Goat meat, often called chevon, is popular because it is a lean meat and is to be sold to private buyers directly off the farm.

Ray finds the hardest part of farming finding time and getting good help to assist with the work.

Cautious with finances, Ray does not mix his household money with farm money, and doesn’t borrow any money to operate his business.

“There’s less stress,” he said when asked about his decision to not use credit to help run the business.

“My favorite thing about farming is seeing how the days change or getting those little victories. Like the ewe that raises triplets,” he said. “You don’t know what tomorrows going to bring, as far as up and down, and profit and loss. It’s that struggle of this is what I want to make it.”

Ray would like to expand his ewe flock and put up another building. He plans to purchase new equipment and fencing in the future, as well.

“I have never talked to someone who farms who doesn’t have ideas about what he wants to do in the future,” he said.

http://www.ozarksfn.com/2019/10/21/diversified-options/http://www.ozarksfn.com/wp-content/uploads/2019/10/RayJones-1024x768.jpghttp://www.ozarksfn.com/wp-content/uploads/2019/10/RayJones-150x150.jpg2019-10-17T16:04:40-05:00Juanita McLellanMissouri NeighborsNeighborsboer buck,Cattle,goat meat,Hampshire,meat goats,Missouri,nanny goats,Polypay Sheep,Ray Jones,Rolla,sheepPolypay sheep, meat goats and cattle roam the farm of Ray Jones Ray Jones has been interested in sheep since childhood. “My grandfather, on and off had some. He had a big farm in North Missouri. They just always clicked with me,” Ray recalled. He enjoyed helping his grandfather, A. R....Juanita McLellan jmclellan@ozarksfn.comAuthorOzarks Farm & Neighbor Newspaper