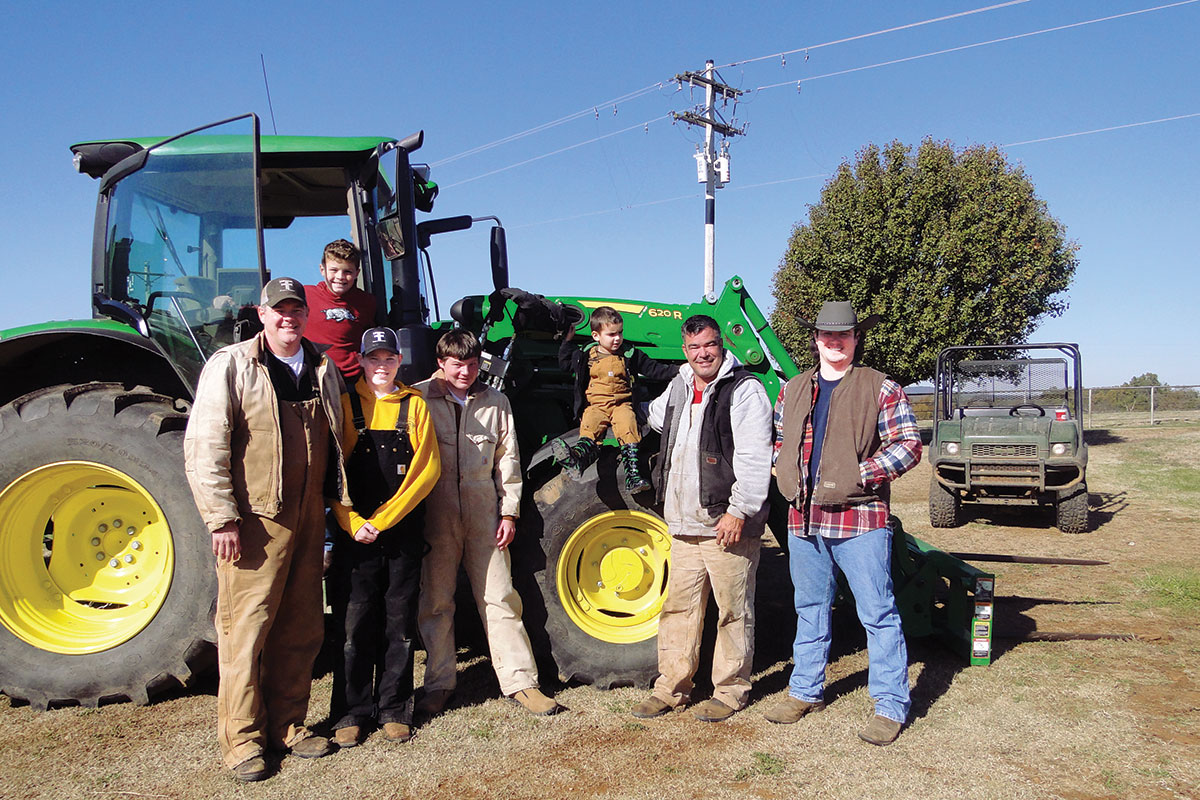 The first 240 acres of Froud Farms in Greenland, Ark., was purchased in 1974 by Lee Froud.

Lee Froud understood how to make money and followed a philosophy with three options: use it, sell it, or buy it-whichever makes the most money.

After dropping out of high school, Lee bought a small filling station, which he sold to buy a grocery store, followed by a couple of farms. He appreciated his grandfather, who was a farmer/rancher near Searcy, Ark., and wanted the same kind of life.

Eventually, Lee sold the store and farms to buy the first 240 acres outside of Greenland, Ark. That new acreage added six chicken houses to his ever-present commercial cattle herd. Lee also custom baled as part of his firm belief in diversifying income, a belief the family follows to this day, with income from rentals taking care of monthly fixed costs.

After Lee passed, sons Darrell and Kevin took over managing the farm for their mother Sue, with the help of Darrell’s 25-year-old son Darian.

Darrell and Kevin’s sister Teresa Baker and her husband Terry live in Bentonville. Terry helps with the farm by handling grounds maintenance and helping with the hay. Darrell graduated from University of Arkansas with a degree in animal science and works in food manufacturing management. Kevin, on the other hand, graduated from Arkansas Tech with an education degree and is a schoolteacher and girls basketball coach for the Prairie Grove school district. Darian works for Professional Cabling Solutions in fiber optics, telephone security and door access.

Kevin handles most of the bookkeeping while financial decisions are shared.

“Darian is a really important part of what we do,” Kevin said. “He fills in wherever he is needed and can reach as many as 10 friends through social media very quickly to help us during emergencies, such as severe weather damage, hay needs or when working cattle.”

Darrell and Kevin were definitely brothers. Kevin remembers being 6 or 7 when a 500-pound calf in a chute ran over him while big brother Darrell laughed loudly. In addition, Kevin remembers Darrell being very bossy and trying to teach 9-year-old Kevin how to drive a tractor, even though Darrell had learned on his own when he was only 6.

The farm ceased producing chickens, but expanded over the years until it now has 1,000 owned and leased acres with 100 mommas and 40 bred heifers. The females are bred by eight registered bulls: two red Angus, one black Angus, five Charolais and one Hereford.

The Frouds keep replacement heifers with the exact number changing according to each year’s needs. Last year, Darrell and Kevin had Bridger Smithers, a veterinarian from West Fork, Ark., preg check the cows with ultrasound which resulted in a heavy cull of 35 percent.

“Bridger Smithers is pretty new to our area but we really like him and use him for herd evaluation, special projects and any emergencies,” Darrell explained.

Another important advisor is Cary Bartholomew, a field representative for the Benton County Sale Barn as well as a rancher. Rather than selling calves on a set schedule, the Frouds follow Cary’s advice, which is determined by a number of factors including grain costs, cash flow, the number of animals available-for-sale and upcoming preconditioning sales.

This year, they successfully began fed hay silage, with calves choosing it over grain. However, while working in the field, Darrell and Kevin noticed very tiny holes in the wrapping material and are now searching for one with a heavier mil.

Pastures are mostly Bermuda and fescue, in addition to a 40-acre wheat field for winter forage. While pastures are fertilized by incorporating manure, hay fields are fertilized with chicken litter or a commercial product on a rotational basis. Kevin recently completed a class to obtain a license for weed control and has broadcast sprayers of various sizes in addition to spot sprayers. Kevin is especially vigorous spraying the thistles because he used to have to dig them out as a child. The brothers hay 300 acres for their own use and an additional 200 for bale sales.

Another important component of the farm’s diversity is custom baling. The baling is done for a list of customers on a specified rotation.

“We have really good customers and deeply appreciate their acceptance of the rotation because we have to be efficient to make the system work,” Kevin said.

“All of our custom hay equipment is purchased to be the most efficient and cost/time effective as possible. Their understanding and support help us to do the very best job we can.” Darrell added.

In the next 10 year,  Kevin and Darrell plan to retire, preferring to spend their time on the farm, with Darian taking over some of the management.

Darrell has an adult daughter named Jennifer and a 3-year-old son named McIntyre, with Kevin having three boys: 16-year-old Brady, 13-year-old Trey and 11-year-old Craig. As time passes and the boys grow, they will become more involved with the farm.