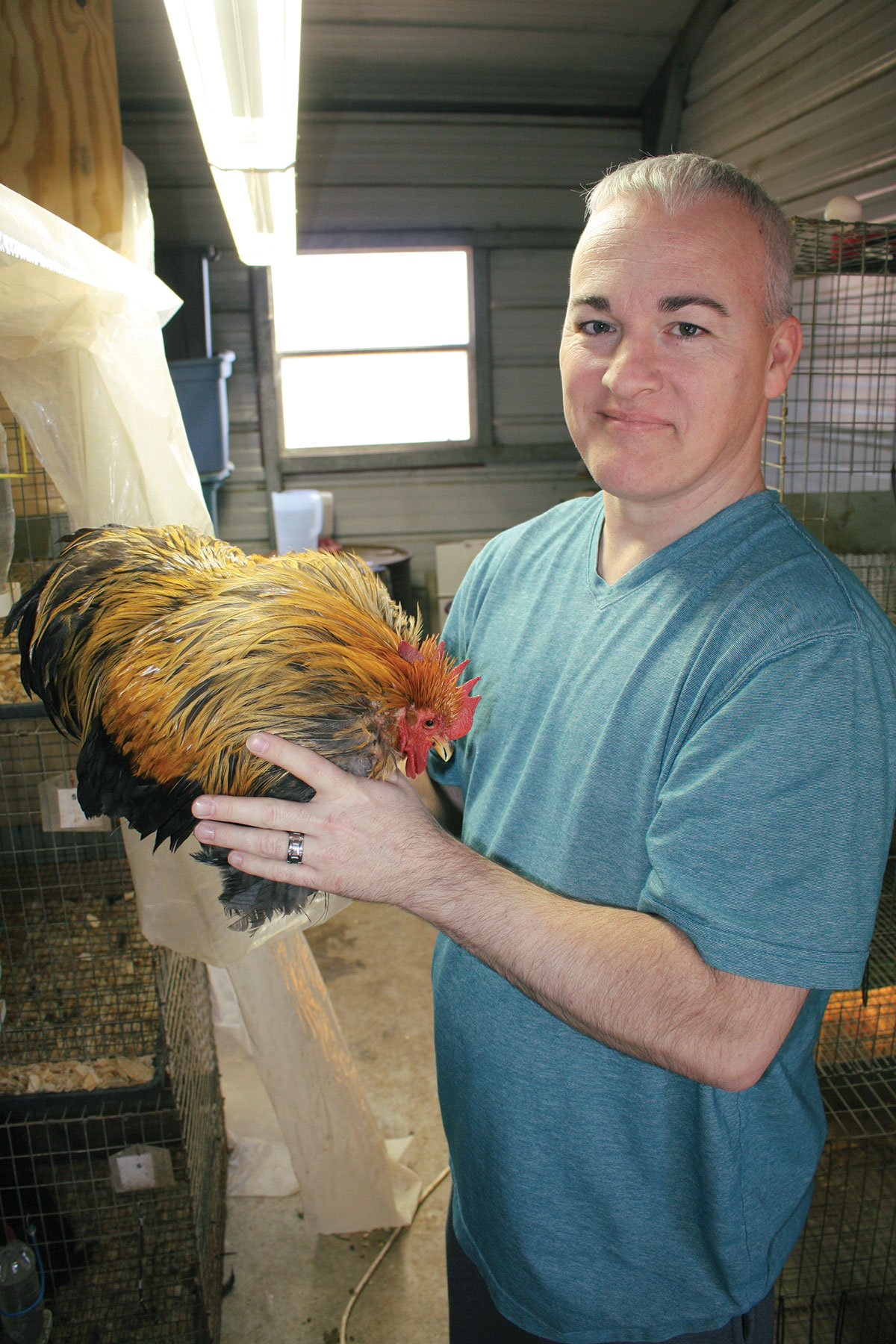 A trip to the local farm supply store prompted Eric Milton to get eight chicks. He had more space at his new home, but no experience with the birds. He hoped for the best and gave it a try.

“I really like the color and variety,” he said. “For me, when I start a project, I shut everything else out. There was a lot of trial and error. I bought some genetics and poultry keeping books, and found a group of people willing to answer questions.”

At Stonebrook Cochins in Ozark, Mo., the main focus is on Brown-Red, Lemon-Blue, Birchen, Silver-Blue Cochins, and splash and sporting variations. There are only a handful of producers around the country breeding for the splash patterns.

“The splash only has value in Cochin breeding,” Eric explained. “I have to be careful because people don’t realize you can’t just breed that to anything; it has to be Birchen. It’s basically about the blue genes. The Brown-Red and the Birchen are on a black base; one has a red overlay and the other has a silver overlay. If you add a blue gene to that mix, it turns the black base blue. If you add two black genes, then it’s a sport or splash. It’s all based on the number of black genes they have.”

A traveling nurse, Eric said the science of poultry genetics appeals to him.

Focusing on overall quality and pattern, Eric is selective which hen and rooster are paired for breeding.

“I try to keep no more than two males from each variety through the winter,” Eric explained. “Trying to go through all of those, it has to come down to which one has the best overall shape, then to the color. My line is pretty well established, so those come right along with it, but you have to be careful.”

Eric hopes to have a closed flock, but the need for outside genetics causes him to look outside his birds, and those new genetics can have a hefty price tag.

“It’s not been tough to find stock, but it has been expensive,” Eric said. “There was one year I needed Lemon-Blue stock, and no one had Lemon-Blues. I ended up going to an online auction for eggs. I told myself not to buy those dadgum eggs because it never works out. I bought the eggs and only two of them hatched; it was an expensive gamble.”

Sticking with breeders who have standards similar to his own is Eric’s first choice for breeding stock.

“They tend to focus on production the same way I do,” Eric said. “I have a little different standard for my birds because there is the U.S. standard and the non-U.S. There are Australian standards, then the U.K. standards. Poultry genetics is more complex than human genetics. If I had the time and money, I would import birds from Australia because I like that type of bird. It takes seven generations to breed out a trait or lock it in.”

Eric explained the Australian lines are a rounder, fuller bird, a trait he wants to improve in his flock

“Australia has many more years of doing this with these types of birds,” he added. “Some people would disagree because that’s not the standard here, but I think it would only help our standard. Using those genetics will embellish what we need here. There’s no way, however, to get the perfect bird; a bird with the perfect pattern and perfect shape. I have some really great-shaped birds with no pattern, and then I’ve hatched birds with the perfect pattern and no shape. That’s why improving with new genetics is so important. If you want to lock in a trait, you can do that, but how are you breeding for vigor if you aren’t bringing in other lines? When you get into this line, so many breeders have shared birds and that it makes it difficult to get new genetics.”

To add size to his birds, Eric has incorporated a pair of White Cochins.

“In Cochins, white is a recessive gene, not a dominate,” he explained. “Everything that hatches white, I know that’s a recessive white and came from that cross. I’m breeding my Birchens to my Whites. I can, potentially, get Birchens, Silver-Blues and Whites from that breeding. The Whites aren’t really useful, other than adding size. The recessive gene will pop up for generations, but I’m adding size.”

Eric hatches between 200 and 300 chicks annually. A unique management practice at Stonebrook Cochins is not selling chicks, if possible, until they are about 3 months of age.

“If I’m going to sell birds, I want to know they are going to have a certain quality to them, and that’s really hard to see before 3 months,” Eric explained. “A lot of my birds continue to develop until they are 18 months old. I kept one male two years ago and he’s my breeder right now for Lemon-Blues. I just couldn’t decide if I wanted to keep him, then at 13, 14 months old, it was like wow; he looks great now. A month or two before that, I probably wouldn’t have kept him.”

Birds are wormed, treated for mites and bathed before going to their new flocks.

When the time arrives to make that keep or go discussion, Eric reviews the pros and cons of each bird.

“Do they have a toenail on each toe? Do they have what’s called a thumbprint on their combs, which is just a slight indentation where you can put your thumb. That means they could be more prone to having sprigs. Those tiny details are culling factors for me. A lot of people also forget the little details when they are looking at hens,” he said. “I will not sell anything for breeding I would not breed myself. There are times something stayed here and I won’t breed it, but that’s only because I had something better.”

Birds not making Eric’s strict standards are typically given away.

“I have friends whose kids like chickens, but I know they are not going to turn around, breed them and use my name for birds that aren’t quality,” he said. “I want to be careful because that is my reputation.”

As winter arrives, Eric reduces his flock to no more than two roosters and six females of each variety, but spring hatching quickly rebuilds the flock.

“I start collecting eggs around the end of December, the beginning of January,” he said. “In January, the first batch goes into the incubator. In three weeks, we have our first hatch,” he said.

The nutritional needs of his birds are fulfilled with a commercial layer pellet for adult birds, and younger birds are fed a starter with black oil sunflower seeds combined with rye and barley, which Eric sprouts before feeding.

“When it gets really hot in the summer, I mix in the layer pellets and really cold water,” he said. “It turns it into a mush and they love it. In the winter months and when they are molting, I mix in a little cat food for added protein.”

Stonebrook Cochins produces show-quality birds, but it has yet to participate in a show.

“I just enjoy raising my birds. I’m not opposed to showing, but our lives are so busy right now that I don’t think we can show,” Eric said.

His current operation is close to where he wants to be.

“There are other varieties out there that no one is working on,” Eric said. “Do I pair down on the ones I’m doing for another bird? No one is working on these either. My constraints are time and money, and I don’t want to start doing something else because someone else needs it; I want to do what I enjoy. I’m am a minimalist, and there was a time my kids would go to the feed store and say, ‘Baby rabbits!’ ‘Baby ducks!’ You get one or two, then a month or two later, it’s not working. I have lots of friends who take my culled birds and they have chickens, cows, duck and things everywhere, but that wouldn’t be me.”

« An Industry Advocate
Getting it Right »