In Town: “In 2013, I began working part-time for Fastenal while earning degrees in agribusiness/management marketing and animal science at the University of Arkansas in Fayetteville. After graduating in 2015, I became the manager of the Harrison, Ark., location. Then in October 2018, I was given the same position at the Fayetteville location. The company is a business-to-business distributor for industrial/construction supplies such as safety products, metalworking tools and fasteners. My wife Brittany began working with Cavender’s Western Outfitters in 2011 and was promoted to manager in 2016. When she is not working, she is devoted to taking care of our 3-year-old son Brady and the rest of our home needs.”

In Country: “We live on 3 acres in Hindsville and although the acreage is small, we are able to raise commercial meat sheep. We have 18 White Dorper/Katahdin cross ewes bred by a purebred Dorper buck. We choose to run a Dorper buck because the buck is the most important in producing hybrid vigor and a good meat product. One of my practices is to remove a lamb if a ewe produces triplets or occasionally twins if the lambs are behind in their growth. Those lambs we bottle-feed. I sometimes sell the bottle babies to local people who want to raise out a lamb or have one for their children. I like the Dorper/Katahdin product because the ewes have good mothering traits, including milk production and protectiveness. When I changed my buck and bought my current one last August, the herd became synced so a few lambs were born in late March with most in April. The land is organized into three paddocks, and I rotate fairly often. Health protocols include worming twice a year with a drench and the lambs getting a mixed vaccine shot usually at weaning to protect from tetanus and over-eating disease. Timing is critical, so they receive the shot just before I put them on a mixed grain ration I often mix myself. Ewes hooves are trimmed twice a year, and I also administer LA as needed when wet ground makes their feet sore. We sell our 50- to 60-pound lambs at the Harrison Cattlemen’s Livestock Auction during their special sheep and goat sales which are on the third Friday of every month.” 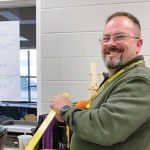 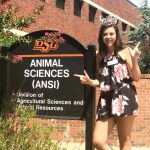 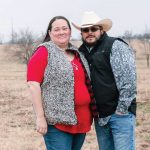