From Preacher’s Daughter to Farmer

Donna Pennington has been the primary operator of Pennington Farm in Bee Branch, Ark.

It’s not unusual a farm wife has a town job, while the husband runs the farm. In the case of the Pennington, those rolls were reversed.

Don Pennington worked as a game warden for 37 years before he retired, and his wife Donna ran the farm. Being the 2014 Farm Family of the Year for Van Buren County demonstrates how well the arrangement worked for them.

“While Don worked, I was at home with our three kids, so me taking charge and organizing our farm made sense,” Donna said. “Make no mistake, we are true partners. While we each have our own areas, we also work well together. Regardless, Don doesn’t know one cow from another even after looking at a tag.”

An example of their partnership is that Don performs AI while Donna researches, selects semen and makes sure everything is ready at the proper time.

“I think perhaps women are more thoughtful in decision-making,” Donna explained. “I make a practice of using only proven bulls but recently purchased a young sire because he proved himself in the show ring rather than the pasture and is to be used for our show stock.”

The couple owns 640 acres and leases another 200 for their registered Charolais breeding and show stock operation.

Previously, the couple ran a dairy for 20 years with one employee in addition to Don and the kids helping as they grew up. Daughters Amy and Allison, and son Brian fed the bottle calves and helped with other chores.

In 2002, when milk prices were “horrible” and cattle prices were still good, the couple decided to switch to a commercial cow/calf operation. They began with bred black commercial females, which they subsequently bred to an Angus bull. The combination did not work well for them.

“When it got hot, the cattle stayed in the ponds rather than eating,” Donna explained. “We also found the calves were too small and didn’t grow out as well as we had hoped.”

Listening to experienced locals, they purchased a registered Charolais bull in hopes of adding heat tolerance and larger, more productive calves. The couple was so impressed with the results that they sold everything in their commercial herd that wasn’t white and used the money to buy a registered Charolais herd.

“I knew nothing about Charolais, but I always bought from old timers who knew the breed,” said Donna. “I learned good bloodlines from them and have never depended much on EPDs when selecting semen or cattle to purchase.”

The Penningtons now keep 75 to 100 females with more than half bred by AI. They also keep two dairy cows to provide milk for twins or a calf whose momma is not producing enough milk. They also sometimes serve as recips for the seven or so ETs the farm produces annually. The remainder of the herd is bred naturally, with most breeding taking place in the spring so the fall calves do not have to contend with hot summer weather and intense insect problems, which Donna also believes can hinders females from breeding back. Last year they had 50 calves born from Sept. 1 through Oct. 30.

The couple once tried synchronization on a group of 30 females and found the conception rate was not as high as the 85 percent rate they get by watching for a female to stand in heat and performing AI 12 hours later. They also flush their best cows and look for one who will give them the most eggs.

“While my husband was raised on a commercial cattle farm, I was a preacher’s daughter and had minimal exposure to my grandparents’ cattle,” Donna commented. “Nonetheless, I always loved animals, especially horses. By the time I was 15, I saved enough money to buy a paint named Lucky, never dreaming I would be running a cattle breeding operation someday.”

The Penningtons sell off the farm by private treaty. Their priority is to sell bulls that produce easy birthing but productive calves, while providing longevity for the buyers. They also sell bred and open females, as well as an occasional cow/calf pair.

One of the reasons Don and Donna got into show stock is some of their nine grandchildren are competing at the county, district and state levels. Ten-year-old granddaughter Lacey is a member of the Arkansas Junior Cattlemen’s Association. This year she won champion heifer and was the leader in the rookie division when the coronavirus forced postponements and perhaps eventual cancellations.

Pennington Farm cattle are mostly grass and hay fed. Females with new calves are given some cubes or grain in order to help keep them calm while newborns are worked in the pasture. They are fed a ration of 12-percent protein pellets with added chopped corn. The goal is to keep their herd in good condition but not fat. Though show cows sometimes don’t breed well, Donna maintains keeping them well developed, but not fat, promotes successful breeding when they are put to pasture.

The farm generally produces all the hay it needs in 200 acres of meadows. They like fertilizing with both chicken litter and commercial fertilizer because they believe the chicken litter builds up the ground better. Don also mixes weed control in the fertilizer. Bermuda pastures are drilled with wheat and rye for fall and winter grazing though hay meadows are not.

“One of our hopes is that our grandchildren will be a bigger part of the farm in the future,” Donna said. 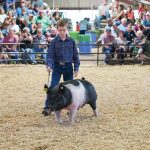