The Francis triplets are fourth-generation farmers, and show livestock at area fairs

Paris, Isaiah and Ariel Francis, 15-year-old triplets from Stoutland, Mo., are the fourth generation to live and work on their family’s 400-acre farm.

While their father Josh Francis, their grandfather Jerry, their uncle Zech and great uncle Chris, operate the larger farm, the triplets and their parents live on 80 acres. Josh also works in construction and mom Natasha does some childcare in their home and raises dogs.

Since they were 6 years old, the Francis triplets have been involved in showing pigs, including crossbred Yorkshires and Hampshires.

“Right now, I have three crossbred Yorkshires,” Isaiah, who does the family’s AI work for their pigs, explained. “My grandpa has one sow and two boars. I also have raise crossbred show pigs.”

“Isaiah pays all of his own expenses on these pigs as well as doing the work, like AI and taking care of them,” Natasha explained. “When he needs feed or other supplies, he makes the calls and the orders himself. His dad felt like this would help him to better understand the business and to help him overcome some of his shyness. He has sold several pigs to neighboring families for their kids to show at local fairs. “Sometimes, I think he could run this place, he does so much. All three of these kids work like grown adults on this farm and we are really proud of them.”

Isaiah and Paris raised crossbred Angus steers for the first time in preparation for the 2020 show season. Isaiah’s steer was sixth in its class and the steer shown by Paris stood third in its class.

The COVID-19 pandemic and changes in school leaves more time for outside farm chores and activities, which are often more appealing to the average teenaged farm youth than paperwork, computers and their related pursuits.

The Francis family also raises hay and their farm is home to a dozen head of cattle, a couple of horses and 30 chickens.

“We have shown pigs at the Richland (Tri-County) Fair, the Laclede County Fair and the Missouri State Fair,” Isaiah said.

As far as their long range future plans, the three all have different dreams and ideas of what they might like to do. Isaiah is the first to say, he would like to find a long range future in agriculture as well as an additional career although at this stage in his life, he’s not sure what that might be.

“I want to be a veterinarian,” Paris said. She said she would be interested in working with both large animals on the farm, as well as smaller animals like dogs and cats.

Ariel’s primary interest at the moment is photography and she enjoys taking pictures of nature.

Whatever the future holds for the three, it is obvious they won’t stray too far from their family’s tradition of agriculture and the many ways it can manifest itself over the generations of a farming family. 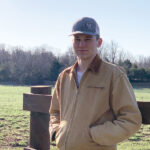