Three Rivers Museum is in the historic Depot District of Muskogee, Okla., near the Arkansas, Grand and Verdigris rivers.

The museum was founded in 1989 with local historian and chair of the Historic Preservation Commission Dorothy Ball pursuing her dream for a local history museum. She and other locals had numerous fundraisers, including bake and yard sales and car washes. The city of Muskogee and residents banded together to make this happen. With help from federal grants and the city of Muskogee, they purchased the derelict 1916 Midland Valley Railroad Depot to serve as the museum’s home.

Of course, the pandemic has disrupted the life of museums everywhere. The museum reopened on June 3, though many annual events have been canceled for now.

When museum director Angie Rush came to work at the museum, she had no formal training. She began as a temporary employee for the previous director Sue Tolbert, after driving a Trolley five years for museum events. Due to health reasons, Sue retired and the museum board of directors offered Angie the position. By that time, she had developed a passion for the museum and for preserving and presenting local history.

“I love introducing others to our local history and helping others find information through research,” Angie said.

In a typical year, the Three Rivers Museum holds numerous events, which serve as fundraisers. The annual Polar Express Pajama Party is held in conjunction with the Roxy Theater and is an example of how the Muskogee community works together. The adventure starts with the purchase of a golden ticket prior to the actual event. When adults and children arrive, they enter the Roxy Theater and watch the movie “Polar Express” while elves serve hot chocolate and a cookie donated by Chick-fil-A. Then participants meet the conductor and engineer for transportation on either a trolley or a bus for a ride over to the North Pole-decorated museum. There attendees get to meet Santa and have their pictures taken with “the jolly old soul.”

Another special event is the Bass Reeves Western History Conference in honor of the African-American U.S. Deputy Marshal who came to the Indian Territory. The purpose is to celebrate his life with reenactments, using period clothing and portraying real events from Bass’s lifetime.

As proof of how popular this museum has become, when it began 10 years ago, only six people attended, but attendance now is more than 200.

Other annual events include Railroad Day and the Bare Bones Film Festival. One event that always sells out is the Haunted History Tours held in October, which covers the Muskogee and Fort Gibson areas. What makes this event so popular are the haunted history true stories.

Three Rivers Museum is organized to teach through exhibits and tours with 7,000 people attending annually. When a visitor enters the door, a timeline explains the Midland Valley Depot and how it leads into the museum proper.

The museum is filled with train memorabilia, including models of trains used during the depot’s history, as well as trains that came through the Katy Depot, another Muskogee depot no longer in existence. An additional area is dedicated to Bass Reeves and Belle Starr. Two featured artifacts are Bass’s gun and what is left of Belle Starr’s original tombstone. The museum preserves the tombstone which was chipped away by people wanting pieces of souvenirs.

Another area of interest is one dedicated to Miss Alice Robertson, the first woman elected to the Oklahoma House of Representatives and the second woman in the United States to be voted into the U.S. Congress in 1920. Alice served until 1923.

The galley room is in the old depot’s freight area, with one of the exhibits being the 1917 founding of the first Girl Scout troop, The Mistletoe troop and Girl Scout cookies, which originated in Muskogee. Finally, the museum has rotating exhibits, such as one dedicated to the military, one about women’s suffrage and others that feature old local businesses, such as Bully Goods Saddle Shop, Kilgore Cotton Gin and more.

Behind the museum are two more wonderful exhibits. One is a 1940s era diesel train engine, given to the museum by the then local paper mill owner. That mill eventually became the Georgia-Pacific Paper Mill and the maker of the Angel Soft, Quilted Northern and Vanity Fair products. The second unattached exhibit is a one-room schoolhouse known as Oak Grove School, previously used for Creek Freedman children and Okay Public Schools. Currently, the museum is developing an exhibit for Black History month, as well as fundraising for a United States Deputy Marshal statue to be placed on the grounds.

Angie fondly remembers a day when a leadership class offered by the Muskogee Chamber of Commerce visited the museum. A 10-year resident of Muskogee had never been there and was amazed at the amount of detailed information available. He went home to verify what he had seen and heard and came back the next two days to learn more. 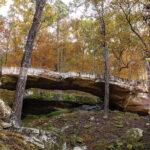 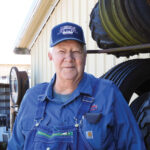